Hell and heaven with Hieronymus Bosch 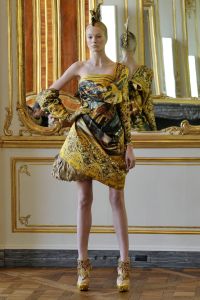 The final, and presumably partially finished, Alexander McQueen collection was shown at a special presentation in Paris today. The collection Sox can be viewed at style.com. cheap mlb jerseys I had such mixed emotions about this presentation. The short dresses with the exaggerated satin full skirts at the beginning felt very out of place with the rest of the collection and I only wished to see more of the Hieronymus Bosch prints, the images of serenity tell only part of a story, whatever were the other pieces like? The grey/pale dresses are so very beautiful understated, architectural and strong. Despite the unearthly wonder of these pieces, I feel uncomfortable knowing it was shown incomplete, and so quietened knowing there’ll be nothing more.

Susie Menkes, writing for the New York Times sums up the collection well: “PARIS — With a pattern of angel wings undulating over her shoulder blades, the model walked through the gilded salon in one of Alexander McQueen’s final creations before he chose to leave this world.

The private show that took place Tuesday, to the classical music Mr. McQueen had been listening to as he cut and fitted the 2010 autumn collection, was a requiem for wholesale jerseys a great designer. His vision of Gothic glory, with a world bathed in religious symbolism, was translated not just with immense subtlety and beauty but also with the urgent futurism that was the essence of his spirit.

So the abstractions of Hieronymus Bosch paintings were not just printed on the sensuous and shapely outfits, where a taut bodice grew out of a multifolded hipline or emerged from soft fabrics flowing around it. Instead the images, with a focus in the British royal heritage of lions rampant or Grinling Gibbons’s wood carvings, were screened, and manipulated and digitally woven. This was part of the designer’s exceptional reach from historic past to cyberspace future.

But the anger and energy that had always driven Mr. McQueen to his finest work had turned to a mesmerizing calm for this 16-piece collection, which he completed before his suicide cheap jerseys last month. The medieval headdress no longer had the wild, joyous madness that it had when Isabella Blow, his friend and mentor, wore one for a 1990s photo shoot. Everything in this collection seemed to be distilled from last season’s short and taut dresses balanced on animalistic footwear.

Here sandals wreathed in gilded roses matched the salon’s ornate decoration, while the with mirrors reflected the models’ golden feather Mohawks. The intense workmanship was of couture quality, which is the way Mr. McQueen had been moving his signature line.

There were damp eyes among the small audience and sobs backstage — both from personal grief and at the scale of the loss to fashion of this singular designer. In this collection Alexander — Lee — McQueen showed his sensitivity to history, his powers of research, his imagination, his technical skills and his love of women, often misinterpreted or misunderstood, but here evident in every fold and feather.”

This site uses Akismet to reduce spam. Learn how your comment data is processed.